Because of our abiding passion for art, we have been attending art functions, visiting galleries in Auckland, New Zealand and internationally, acquiring art at auctions and galleries for years. We love living with, looking at, being stimulated by and discussing contemporary art. We are now sharing our love of art in the public arena with you.

There is a long tradition of art in my family. Both my grandfather (also a university graduate) and father were talented artists. My father was offered a scholarship to art school but due to his circumstances during The Depression could not take it up. However he maintained actively drawing, painting and some bronze casting all his life (as well as being a brilliant engineer). My Aunty too in her later years became a very committed artist. And my cousin was a talented artist – I was surrounded! I greatly admired their ‘just doing art’.

I almost inevitably fell into drawing, other small art projects (most as ‘idea’ – a nascent ‘post modernist’ in the making!) and developed an enduring passion for photography. (Reminiscing now I always think I could have made a rather good, second rate artist). Along the way I was attracted to the History of Art and majored in this, along with philosophy during my undergraduate studies. Art has always fascinated me, both from an aesthetic perspective (I have a rather indulgent eye for colour and form) but also from a philosophic/cultural perspective of content and meaning. I feel very privileged to have grown up in an era of so much change in society, values, science, business, philosophy and of course art, all of which has produced such a vast outpouring of innovation and challenges to tradition. I enjoy immensely, particularly with art, wading through this endless flicking cavern of ambiguity, effervescence, cyclic rollercoasters of both fashion and serious endeavour – imagining I am near the cutting edge of knowledge but confounded the very next day by yet another door opening into the unknown.

My career has been in marketing and international business which has given me a whole range of valuable skills and experience (including formally evaluating the art ‘market’ from a ‘value and opportunity’ perspective) which I enjoy and am still pursuing but at a quieter pace. I am really excited about the challenge of ArtExplore and through this sharing with you my experiences of living with, collecting and appreciation of art.

My childhood background was the culturally limited one of a fundamentalist religion. As a teenager and part of the baby boomer generation I joined the societal rebellion. Our grandparents and parents were battered by two world wars and the great depression and therefore sought safety in tradition and materialism. The baby boomer generation rebellion was in part a quest for a better society where another world war would be an impossibility. In this era of tumultuous change I was exposed to and immediately attracted to contemporary art, visual, performing, literature, cinema etc. This art provided a reflection on life, questioning, challenging, asking the unspeakable questions, searching for impossible solutions, as we tried to create meaningful lives and a society better for us ordinary people. This artistic expression stimulated me then and continues to do so now. One of my favourite things is attending art galleries, both public and private, to stand before a piece of art and contemplate it. I feel so privileged to have our own collection where I can see the same art over and over, revisiting and seeing again and again the same work, gaining more and more from it.

TJ McNamara was wearing black long before it became the uniform of the art world. And he cuts a fine dash in it too.

As art critic for the NZ Herald, he has been covering burgeoning art scene for (more than) 45 years. In that time, he has witnessed and chronicled contemporary art in New Zealand from its nascence, through its troubled (and arguably ongoing adolescence) to its present age.

His first article (a review of the Society of Arts Festival) appeared in the Herald on 11 May 1966 and, over the next four decades, the initials TJMcN have appeared in the by-line of more than 2000 features and columns.

When he started out, there were just two contemporary art galleries in Auckland: New Vision and Barry Lett Galleries. In his first decade of reviews, he covered exhibitions by Philip Clairmont, Theo Schoon, Milan Mrkusich and Gordon Walters and of course, Colin McCahon.

There are now more than 20 new exhibitions opening in any given week across the city and TJ makes a concerted effort to get to and write about as many of them as possible. The task is daunting considering the potential parking fines alone.

He takes his role as envoy between contemporary art and the public seriously, writing concisely, accessibly and very specifically for a newspaper audience.

In a 2006 interview with Arts Editor Linda Herrick he explains: “There are two types of critics – some live alongside artists, they go to the studios, they talk, they belong to a circle and they can have great insights. But I am writing for a daily paper. I sort of see myself as a representative of the person who goes into the gallery. I have always written my response to what’s on the wall.”

His weekly column has been the cause of both anticipation and dread for several generations of aspiring artists and, in his 75th year, TJ McNamara shows no sign of letting them off the hook any time soon.

TJ McNamara was on the Arts appears in Section B, Weekend Herald.
From Art Fair News 8 March 2012

Gina Matchitt was born in 1966 in Rotorua, New Zealand and studied at Unitec School of Design in Auckland.  Drawing on her Maori tribal affiliations, Te Arawa and Te Whakatohea, her work is a fusion of Maori and Pakeha (European) concepts.  Matchitt explores the rich traditions of Te Ao Maori (the Maori World), by reworking customary Maori pattern and language with contemporary materials.  Using recycled computer keys, stickers, fabric, photography and duct tape, Matchitt’s work contributes to Maori visual language in the 21stcentury.  In 2019 her work He Tohutono (The Commanding Sign) was the runner up at the National Conetmaporary Art Awards at Waikato Museum. Widely exhibited in New Zealand, Australia, The Netherlands, United States and Switzerland, Matchitt’s work is featured in many major New Zealand collections such as Te Papa Tongarewa – The National Museum of New Zealand, Auckland Museum, Auckland Art Gallery and The Dowse.

Gina Matchitt  lived in Washington DC and Rome, Italy from 2007 until 2014. The artist graduated with a Masters in Maori Visual Arts from Massey University in 2011 and returned to Aotearoa/New Zealand with her whanau in 2014. https://www.ginamatchitt.com/

Mark Amery has for many years worked  as an art critic, writer, editor and broadcaster across the arts and media. He is the Arts Editor for The Dominion Post, writes for www.eyecontactsite.com and www.thebigidea.co.nz He is co-curator of public art programme www.lettingspace.org.nz 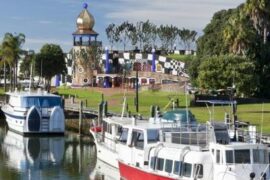